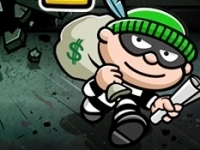 88%
Instructions
How to Play?

Bob The Robber has to protect the city! This bandit is the only one that can save the day. In Bob The Robber 2 you have to sneak into buildings, avoid cameras, pick locks, take out guards and watch out for Zombies! Bob The Robber 2 is a terrific game which you can play for free in in friv10000000000.com. With Bob The Robber 2 game, we supply many cool Friv 10000000000 games to play at no cost.

Use Arrow keys And WASD button to Move, Use W And Arrow Up button to Climb/Read/Use, Use Spacebar button to Cut Wire/Action,